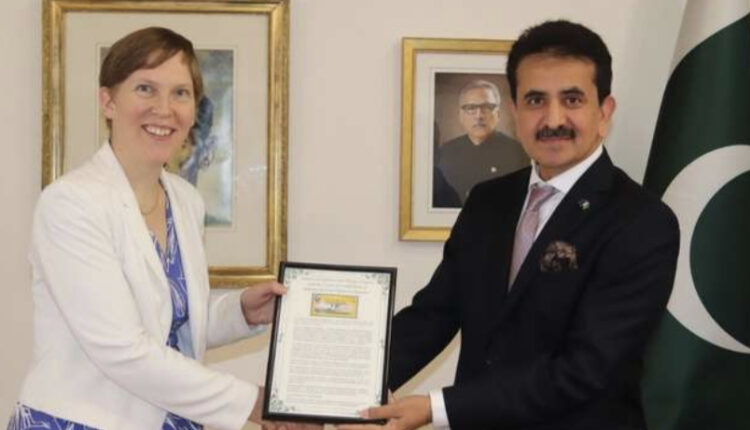 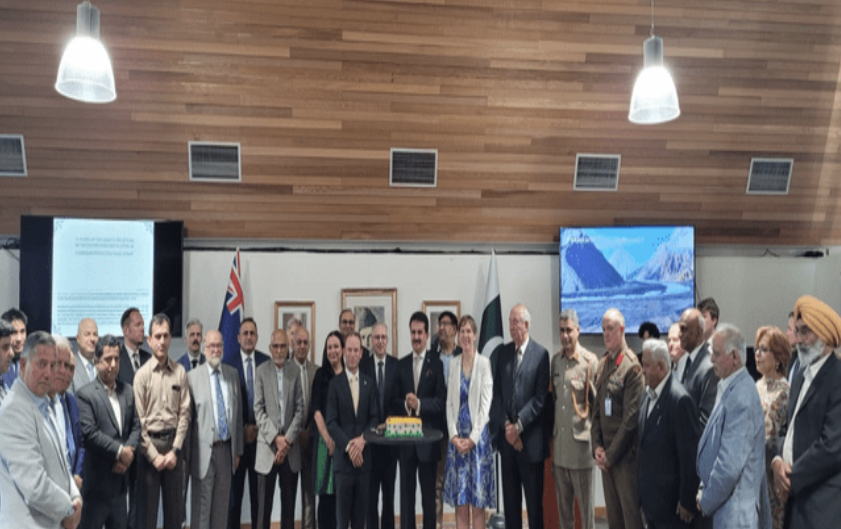 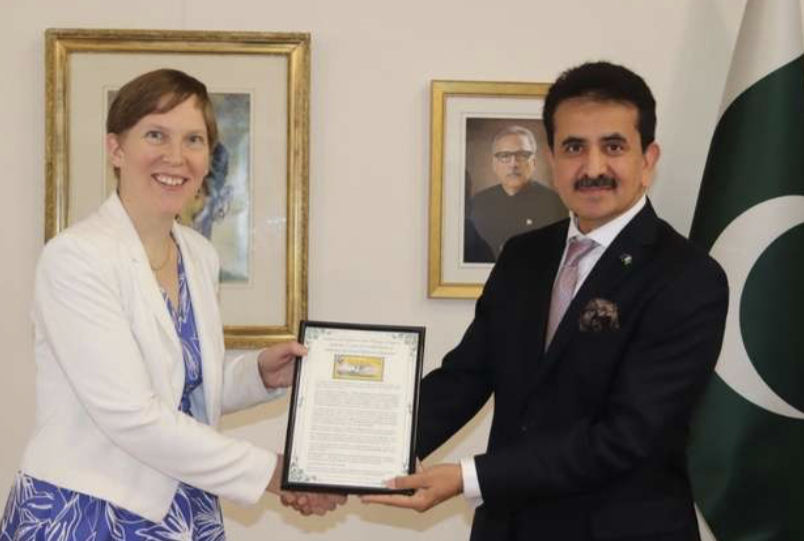 An impressive ceremony was held at the High Commission for Pakistan, Canberra as part of the celebrations marking the 75th anniversary of establishment of diplomatic relations between Pakistan and Australia. A commemorative postage stamp was also launched on the occasion to highlight the significance of cordial and cooperative relations between the two countries. 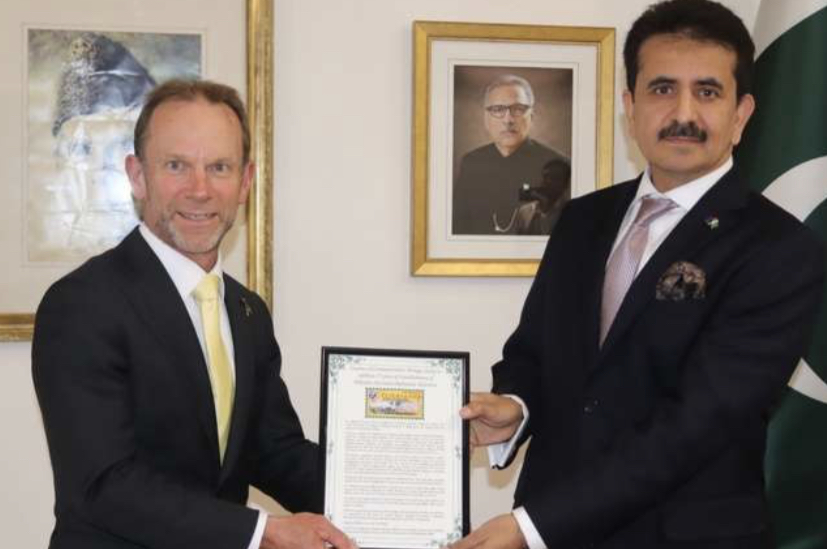 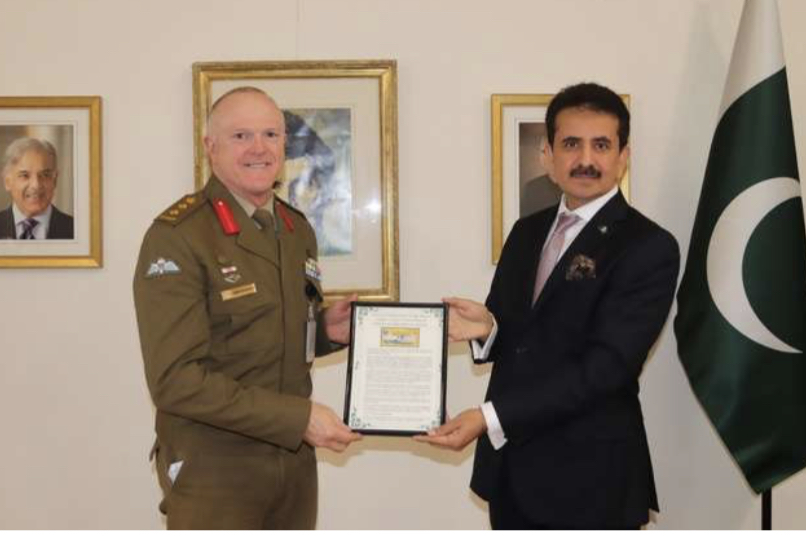 The ceremony was attended by senior Australian officials, academicians, members of the Think Tank community, and media representatives. Members of the Pakistani-Australian community were also present on the occasion in large numbers. 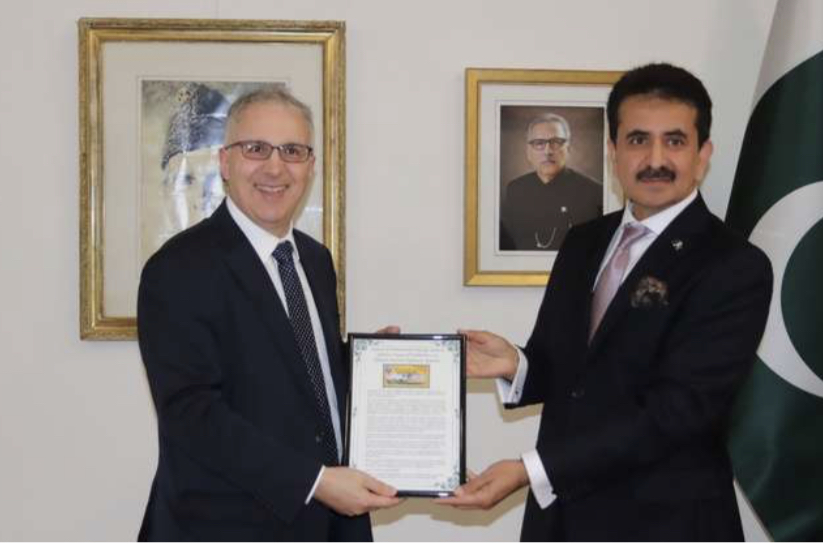 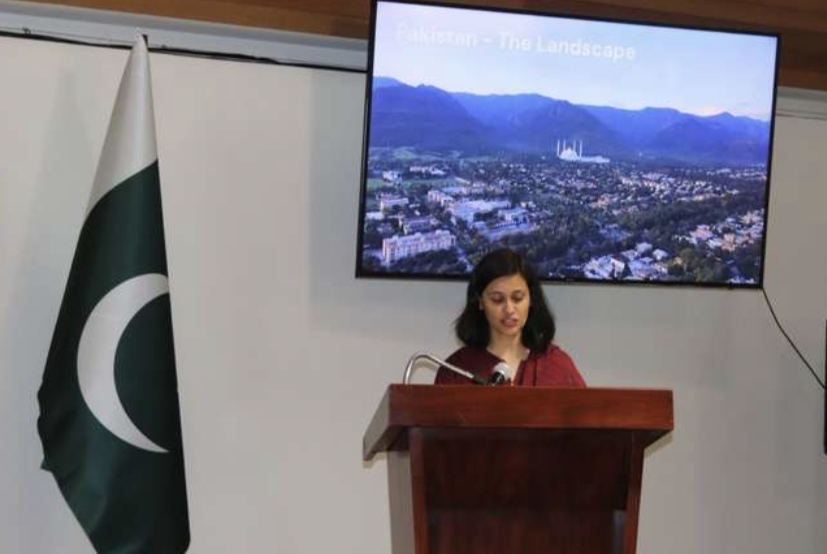 Pakistan and Australia have a long history of friendship and cooperation. The diplomatic relations between the two countries were established soon after Pakistan gained independence in 1947. Australia has maintained a resident diplomatic Mission in Pakistan since 1948. The relations between the two countries have grown in all areas during the past 75 years. 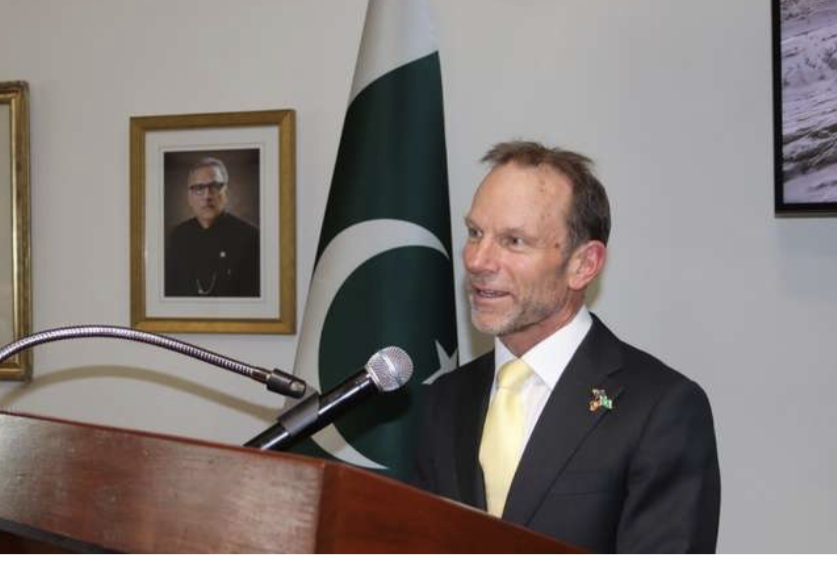 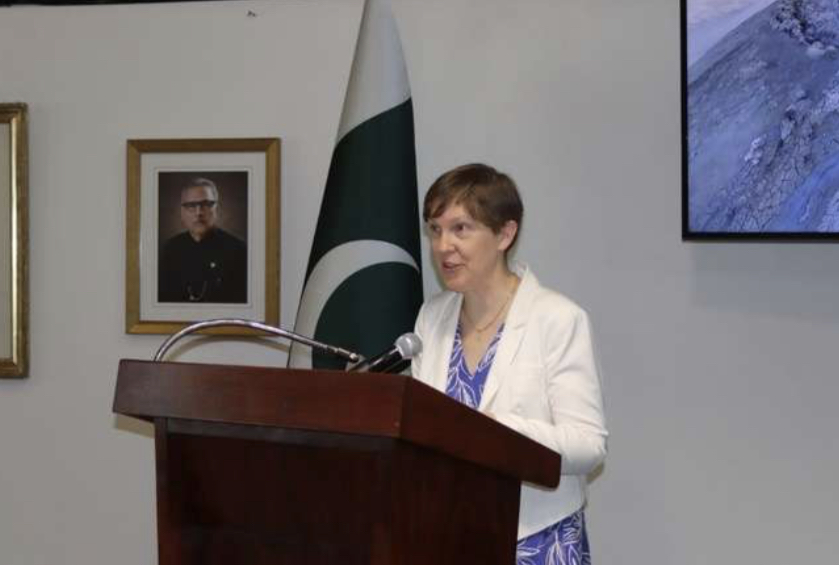 The bilateral cooperation between Pakistan and Australia extends to the areas of politics, trade and investment, defence and security, science and technology, social and economic development, education, sports, and tourism. The two countries have established multiple institutional mechanisms to discuss ongoing cooperation and explore new avenues of future collaboration. The common passion for cricket and the presence of over 100,000 strong Pakistani Diaspora in Australia act as a strong bridge between the two countries and their peoples.Furthermore, the two countries work closely at multilateral fora. 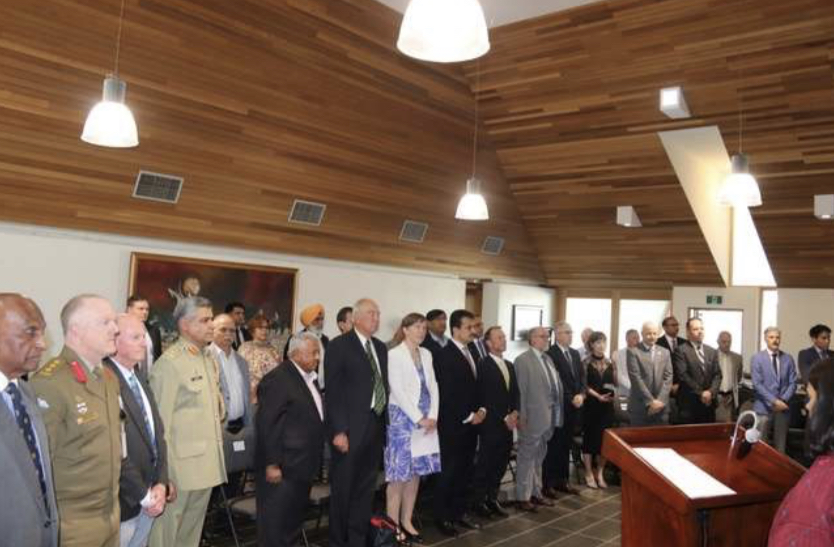 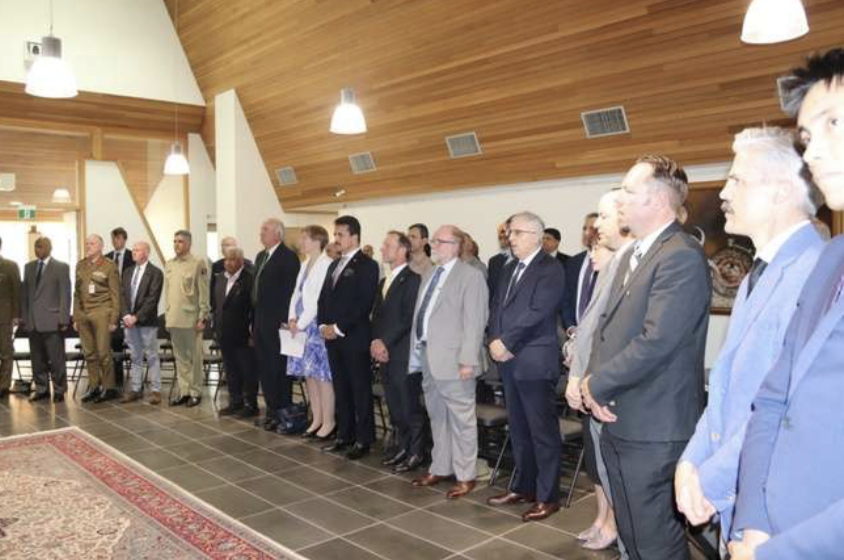 Speaking on the occasion, High Commissioner Zahid Hafeez Chaudhri stated that Australia was amongst the first countries that established diplomatic relations with Pakistan after its independence. He added that these relations have grown in diverse fields over time to the mutual benefit of the two countries. Underscoring the importance of Parliamentary cooperation in strengthening bilateral relations, he congratulated both sides on the recent establishment of largest-ever Australia-Pakistan Friendship Group in the Australian Parliament.

The High Commissioner also recognized the presence of 100,000 strong Pakistani diaspora in Australia which acts as a lasting bridge between the two countries. He particularly acknowledged their achievements and contribution towards the development of Australia. 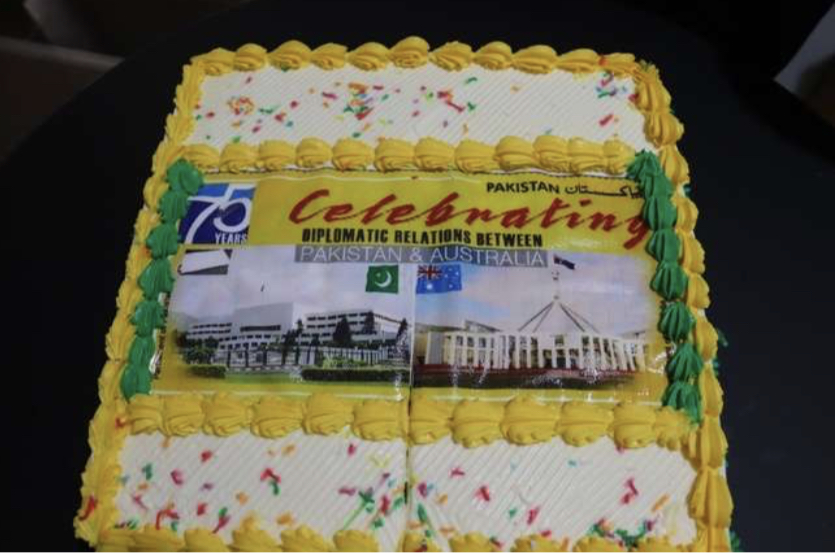 The High Commissioner underscored that Pakistan greatly valued its friendship with Australia. He expressed the desire to work closely with various Australian Departments to further strengthen cooperation in all areas of mutual interest, including Information Technology, Infrastructure, Climate Change, Education, Agriculture, and Water Management.

In her message, the Foreign Minister congratulated on the 75th anniversary of diplomatic relations between Pakistan and Australia. She highlighted the longstanding relations between the two countries dating back to the nineteenth century when cameleers from present-day Pakistan contributed to the development of Australia.

She underscored the close linkages between the two countries and acknowledged the contribution of around 100,000 Pakistani Diaspora in a wide range of areas including business, academia, politics, the arts, and sports. The two sides share a common interest in peace, stability and prosperity and continue to help each other in times of need, she added.

The Foreign Minister thanked Pakistan for the warm welcome extended to the Australian men’s cricket team for their first tour to Pakistan in over 20 years. She also acknowledged the gallant showing of Pakistan’s men’s T20 team at the ICC World Cup 2022 held in Australia.

She reaffirmed Australia’s commitment to continue working closely with Pakistan to advance both sides’ shared interests and addressing the common challenges. She added that she looked forward to furthering Australia-Pakistan bilateral relationship in the years ahead.